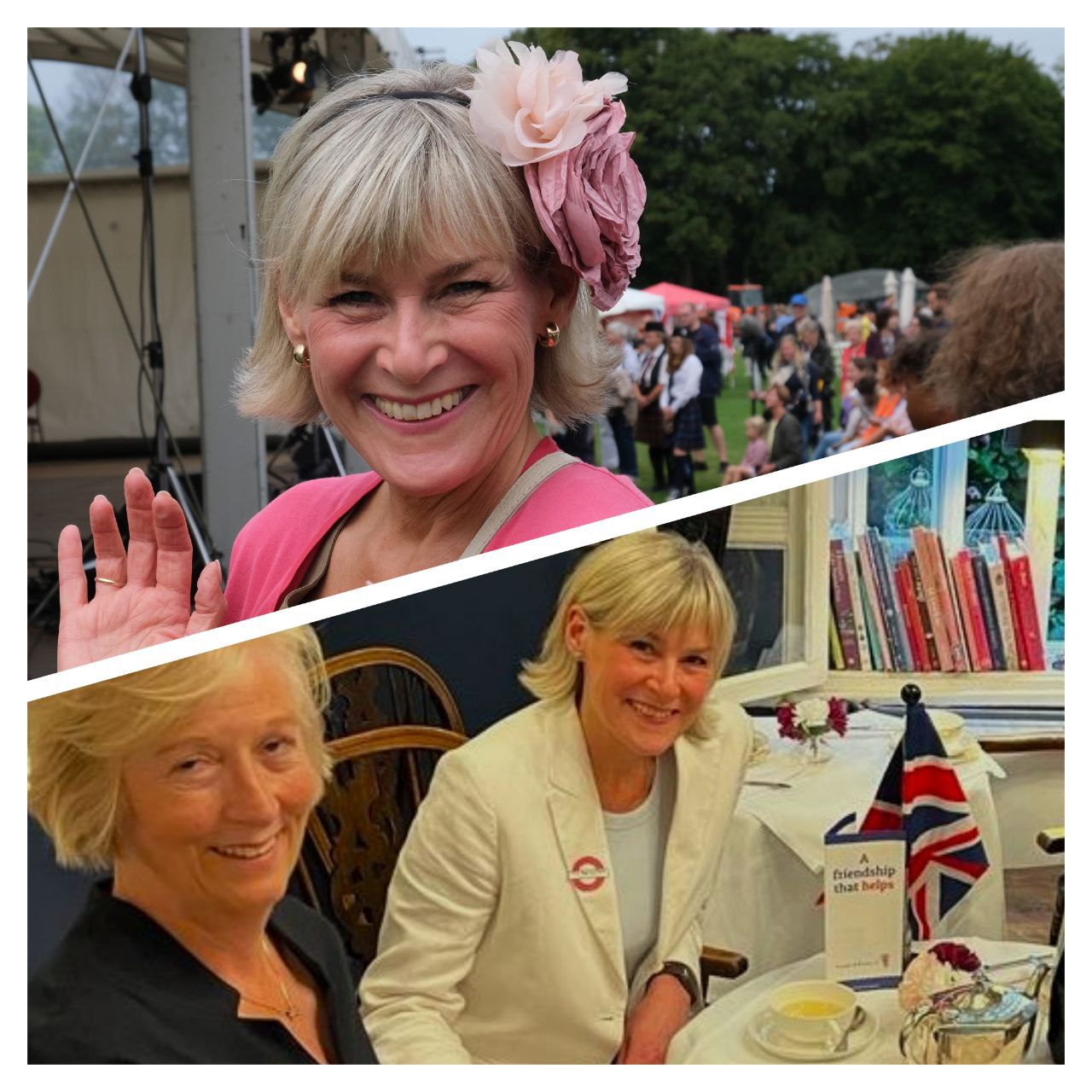 Photos by Stellios Kamtsikis and Wendy Sprock
Top photo: Eleanor Kamtsikis-Jones at British Flair 2022
Bottom Photo: Left-Wendy Sprock, Right- Eleanor Kamtsikis-Jones interview for NDR television
Sad news for the Friends of Britain committee as Eleanor - responsible for the social media content, website and press releases - has decided to step down from her duties due to her tight time schedule of her language school business.

Eleanor joined Friends of Britain three years ago with the purpose of building -up and creating digital platform sites, creating content for the website and writing press releases after fundraising events. The reasons behind this decision, was to generate more awareness of the Friends of Britain e.V fundraising activities and to attract larger audiences to their events. Just one example of her work was creating an Instagram account from scratch, which has now a total of 460 followers.

Her work has proven to be very successful in helping to promote concerts and fundraising events over the last few years and also helping to raise considerable amounts of money that have gone towards chosen charities in Hamburg.

Furthermore, Eleanor also organised 2 “Promi” quizzes over the last couple of years at British Flair. She was able to help win contestants who were popular and well known in and around the Hamburg area e.g., Ingo Zamperoni, Julia Westlake and Sandra Quadflieg. The quizzes proved to be a great success as they were relevant to helping towards language and communication in both English and German plus, the audience had a chance to participate too!

We will miss Eleanor dearly, look forward to seeing her at future events as a welcomed guest and wish her the best of luck with her business “TUB-Sprachen, Hamburg”!

November 2021 A warm welcome to our new Friends of Britain committee members!

We would like to welcome both Evelyn Lembach and Kai Pawlowski as our new committee members at Friends of Britain.
Both Evelyn and Kai have been actively involved within our organisation for some years. They have always made time to assist us practically at British Flair also in planning and seeing through other Anglo-German charity projects during the course of the year.
When recently asked if they would like to officially join our committee, they didn’t hesitate and immediately agreed and we would like to extend a warm welcome to them! 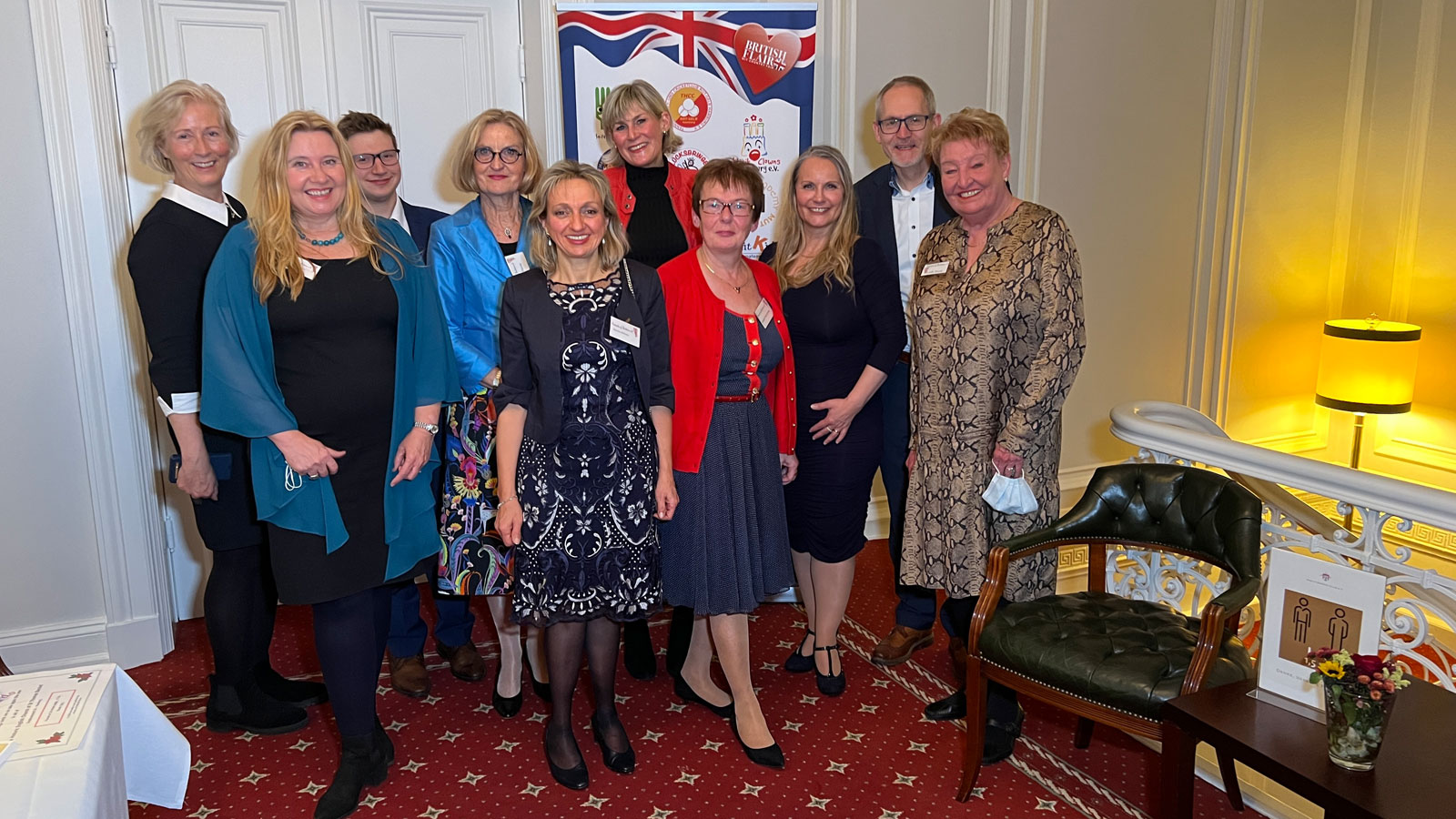 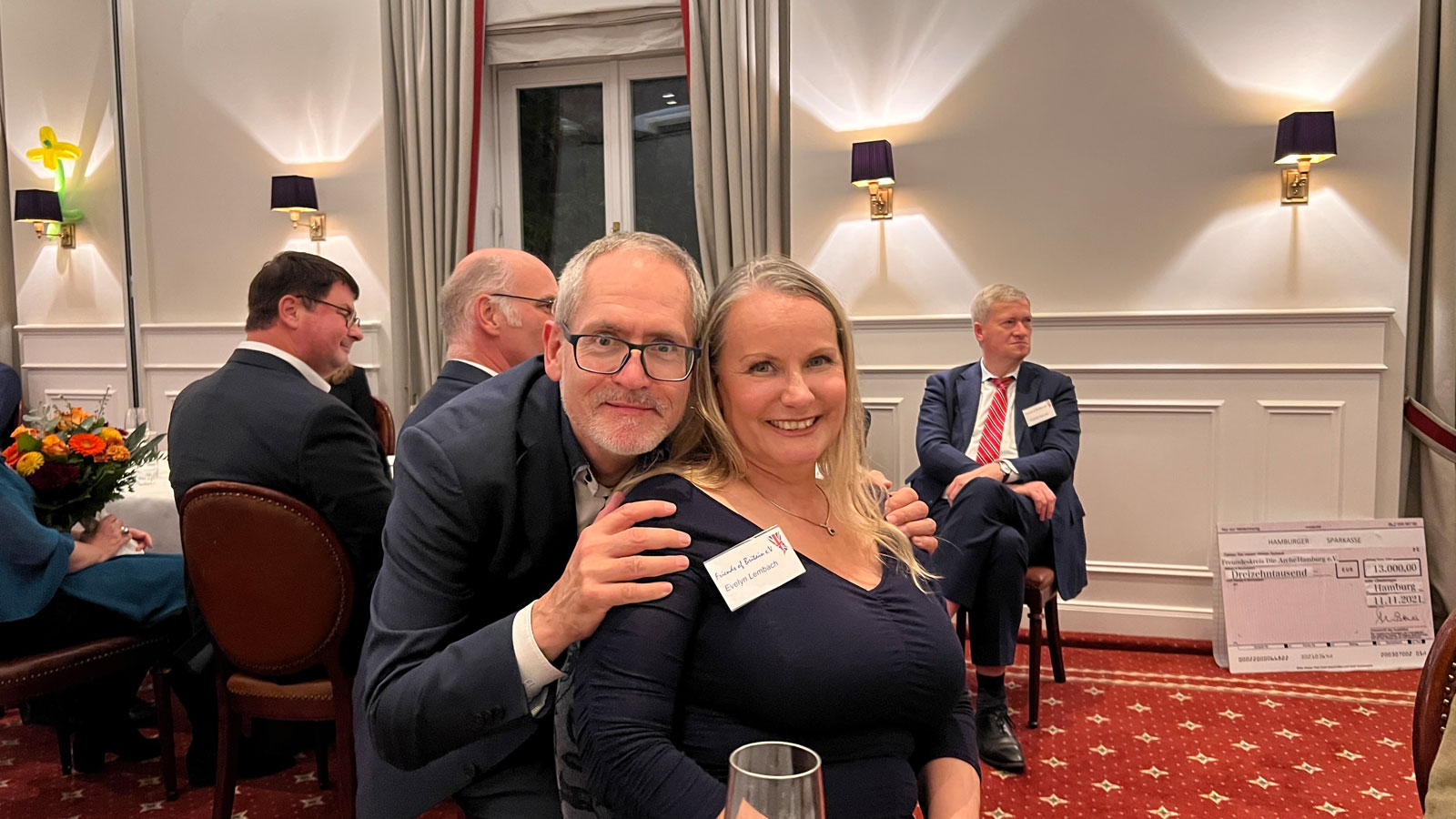 Sad news for the Friends of Britain committee as 2 members have decided to step down from their duties after many years of dedicated charity work.

Aimée Riecke has been a cornerstone of Friends of Britain since 2013. Her many years of tireless dedication and support along with organising, networking and – in the last 10 years –one of the main organisers and dedicated tombola team members, has made her a truly valuable asset within our team. Understandably, she would now like to spend more time with her grandchildren and family, making way for new members to continue building the foundations of our charity organisation with special focus on the British Flair Tombola which has always proven to be a success and is our main donation source.

Stefanie Nießen has also decided to reprioritise her life due to her recent promotion within a global company which demands a lot of her time. This has led Stefanie to rethink her time and travel management.

After joining the Friends of Britain committee in 2008, she too has been an incredible support within our team. This was not just in the form of stepping up our successful annual tombola at British Flair, but also tirelessly focusing on organising the orchestra for the yearly British Flair Open-Air Proms Concert and many other additional musical charity events over the years since 2014. One such event which highlighted last year’s programme was “Tales & Tunes - a journey through the British Isles” which took place at the Heidbarghof in Hamburg.

Fortunately, we will continue to hear and see Stefanie in the future, as she will take on a lesser role and continue to organise concerts with her musical counterpart Ian Mardon, starting with Tales & Tunes in 2022.

When saying goodbye, we don't say farewell or adieu or goodbye:
In Hamburg, we say Tschüss, which means auf Wiedersehen...

August 2021 The Friends of Britain team would like to thank Jo Dawes for all her years of involvement and support at British Fair! 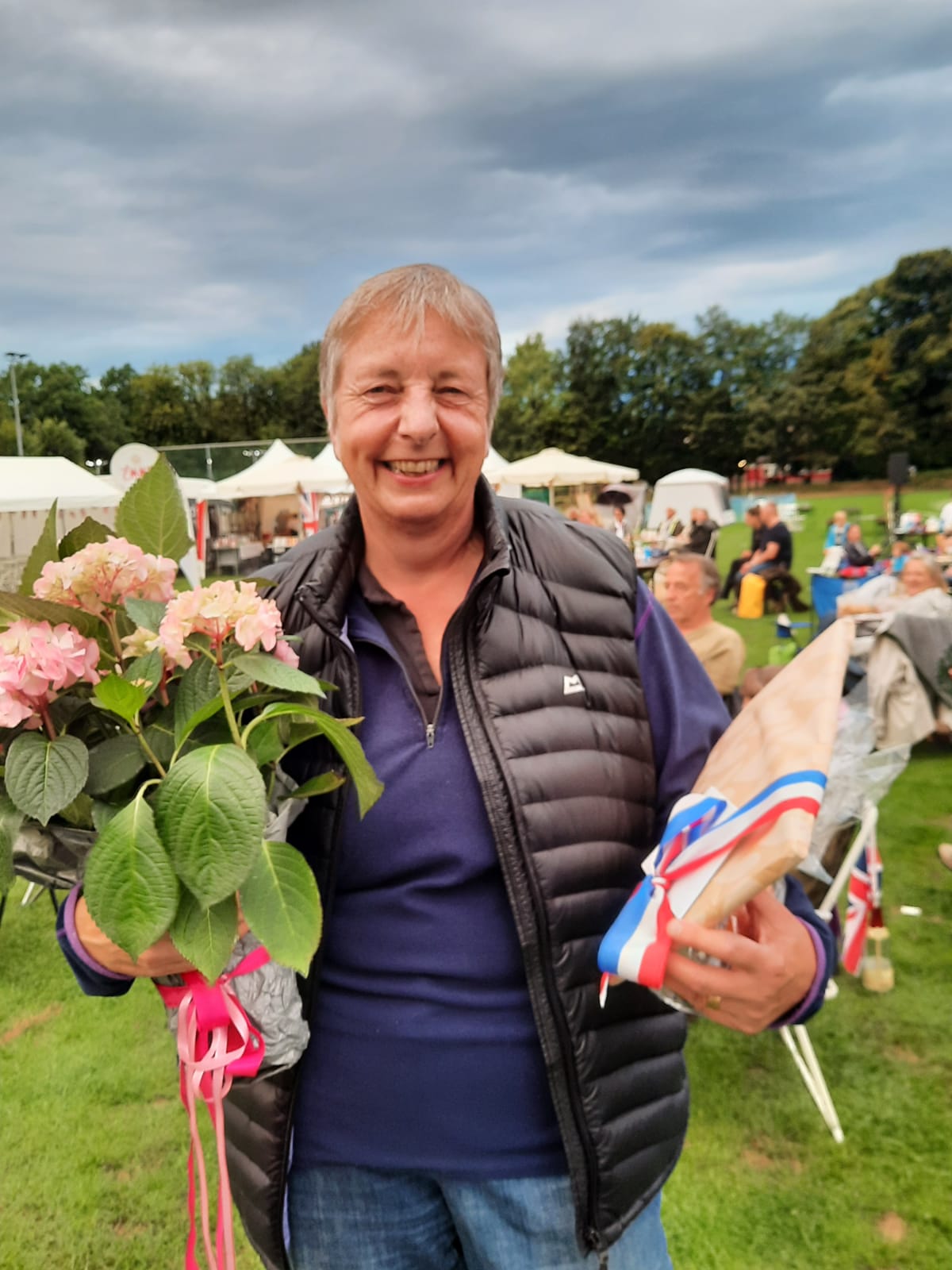 After organising the British Flair field and stage programme for over ten years - and having been involved in other ways since the early 1990s - Jo Dawes has decided to hand over the baton to someone new as from 2022 thus allowing more free time for other ambitions in her life.
We are immensely grateful to Jo for always being reliable and a "sunshine" to work with. We will miss her level-headed approach with the programme logistics and her winning sense of humour, even when things got "hairy"!
We wish Jo well in all her subsequent plans and look forward to seeing her as a visitor at future British Flair events where she can simply soak up the atmosphere and just enjoy it!

Since 1991, our association has been able to donate about € 800,000 to charity projects in Hamburg and the North of Germany. This year the funds raised by Friends of Britain e.V. at the British Flair event will be in favour of the MUT Academy – project: Camps for giving Hamburg pupils from a challenging environment the courage to achieve a school leaving certificate and to move on into professional life.

The society, Friends of Britain e.V., was originally known as BCCG British Day e.V. and was founded in 1991 by the Hamburg Branch of the British Chamber of Commerce Germany. The aim of BCCG British Day e.V. was to give British companies in Germany and German companies selling British goods and services a high profile British “Lifestyle” event to present themselves and their products to the discerning and anglophile Hamburg public. British Day also gave the visitors the chance to experience the “British Way of Life” in the heart of Hamburg (whilst raising money for local charities) with demonstrations of British sport, humour, live music and theatre, and other recreational activities such as Highland Games, Sheep Dog Trials, etc.

Starting with a one-day event, British Day soon became so popular in the Western suburbs of Hamburg, along the banks of the Elbe river, that it was extended in 1996 to a 2-day, and a few years ago even a three-day event. As a particular cultural highlight “The Open Air Last Night of the Proms Classic Concert” was included on the Saturday evening. The exhibitors benefit from the opportunity to present themselves to the public over this extended period.

with a one-day event, British Day soon became so popular in the Western suburbs of Hamburg, along the banks of the Elbe river, that it was extended in 1996 to a 2-day event, to include the cultural highlight, “The open Air Last Night of the Proms Classic Concert” thus giving the exhibitors two days to benefit from their presence at the event.

In 2011, when the original organising team of British Day wished to retire after 20 years, the event was sold to the organisers of the prestige event Home & Garden, benefitting the e.V. and local charities. The event is now run by Das AgenturHaus GmbH in Lübeck. Under the new management a new name – “British Flair” – was given to the event, and the BCCG British Day e.V. was renamed “Friends of Britain e.V.” Both the event, under its new management, and the society with its new committee of eager volunteers, continue to thrive.

Besides organising the commercial event British Flair, Das AgenturHaus GmbH has been kind enough to allow the Friends of Britain e.V. to continue its charity tombola at the event, supported by other fund-raising stands and activities such as The Caledonian Society and The British Club Hamburg who run the Welly Wanging stand, the Rotaract Club Hamburg-Alstertal, The Hamburg Players, the Anglican Church of St. Thomas Becket, the Anglo-German Club, the First Hamburg Toastmasters, The Lions Club Hamburg-Altona and Klövensteen, as well as several others. A new, preferably local charity is chosen each year and besides benefitting from the proceeds of the fund-raising activities, is given the opportunity to present itself to the public during the event. Another aim of the Friends of Britain e.V. is to promote German-British connections in Hamburg in particular through various extra events organised throughout the year, providing an umbrella for the various British societies and clubs in Hamburg and area to meet at and participate in communal events.